is a grassroots movement built from the ground up. It's a space where poor and marginalized folks are the experts, the leaders, who come together to work toward economic justice and equity in our local communities, our state, and our country. We're organizing to make West Virginia a state built on an infrastructure of care that is focused on our values and our families. We're turning our pain into power.

Read the transcript of her testimony here.

19 pointed out all of our country’s

members of the United States

Congress in the House Committee

of Oversight and Reform about the

struggles of the working poor in

of people had reached out to her

stories of struggle and resilience.

her speech, became a battle cry

And a movement was born. 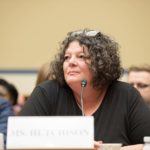 Amy Jo Hutchison is a lifelong resident of West Virginia. Her lived experience is centered around poverty and raising her children alone.

She has been working as a community organizer since 2017, but, as she says, organizing isn’t her job, it’s her life. “I was organizing long before I knew it had a name and people did it for a living.  I was just a mom who wanted better for my kids and the kids in my community and fought like hell to get it.”